Registered 1872. The company built the ‘Castalia’, a double hulled paddle steamer for the cross Channel service between Dover and Calais. Sold for use as a hospital ship on the Thames in 1883. Dissolved <1916. Company number 6686
Capital not known.

The company built the ‘Castalia’, a double hulled paddle steamer specially designed by Captain W. T. Y. Dicey for the cross Channel service between Dover and Calais. Sea sickness was a great problem and the design was intended to alleviate this problem. Dicey was a former Harbour Master at the Port of Calcutta and was taken with the small catamarans that were in use in the region and that gave him the idea for this design. Essentially the ship was made from two half-hulls which were joined together and paddle wheels were in the centre. The ship was made the same at both ends so there was no need for turning round for the return journey. Slower than expected the ship was immediately refitted but was not a financial success and was sold for use as a hospital ship on the Thames in 1883. 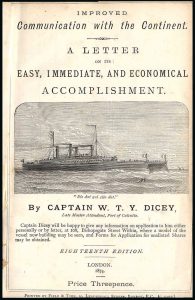