Incorporated on 9th July 1847.
An amalgamation of the Manchester and Leeds Railway with the Ashton, Stalybridge and Liverpool Junction, and the Wakefield, Pontefract and Goole Railways, this after having also acquired numerous small lines in the area. Further lines were acquired at this stage, and the network formed the third largest railway company in the north after the Midland Railway and North Eastern Railway. The Lancashire and Yorkshire Railway joined the London and North Western at grouping.
Original capital £140,000 and loans £46,000. Total authorised capital in 1890 £35,182,526 in stock and shares, and £12,918,588 in loans. 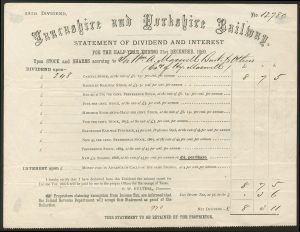