Incorporated on 31stJuly 1845.
A standard gauge line running 58 miles linking Aberdeen to the Abroath and Forfar Railway, Montrose and Brechin. It was operated by the Scottish Central Railway from 1851 and merged with the Scottish Midland Junction Railway in 1856 to form the Scottish North Eastern Railway. This company was absorbed by the Caledonian Railway in 1866.
Original capital £830,000 in shares of £50 each. Loans of £276,660. Total capital in 1853 was £1,233,866 in shares/stock and £100,000 in debenture stock. 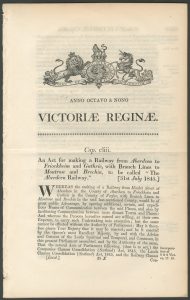